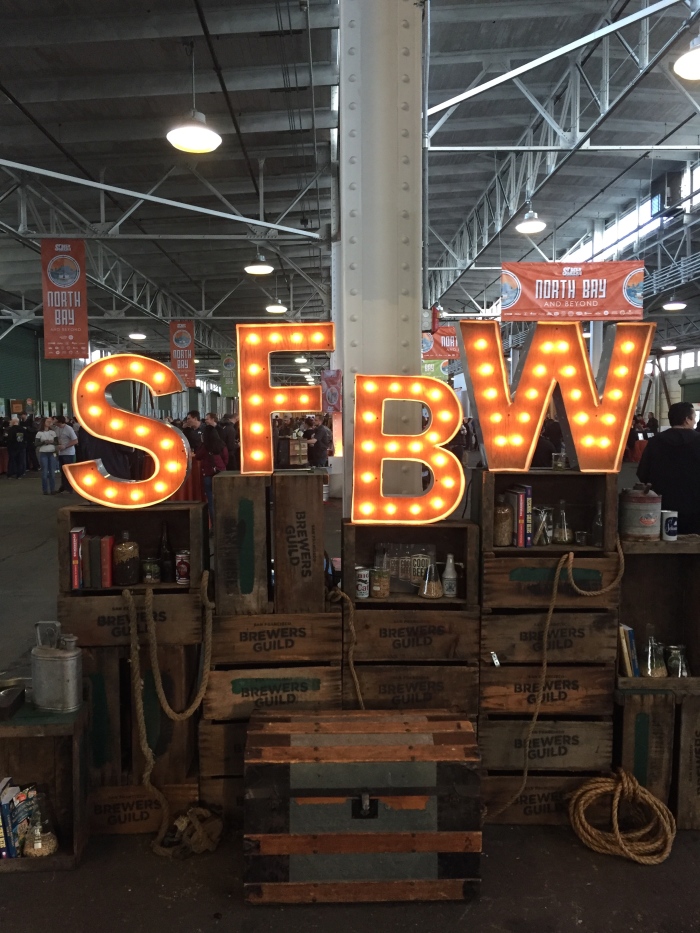 Friday night’s SF Beer Week Opening Gala hosted an impressive crowd. From causal beer drinkers and professional level connoisseurs, to Mom-and-Dad-on-a-date and monied tech-workers, a wide swath of the city’s thirstiest came out to Pier 48 where over 120 breweries were pouring some of the best beer around.

As doors opened at 5 o’clock, the rather substantial VIP line moved in unison, like a flock of birds, and re-formed in front of the Russian River pouring station. In spite of the growing backlash against manufactured scarcity and people’s willingness to queue up for absurd lengths of time, the allure of their triple IPA, Pliny the Younger, does not seem to have waned. Within minutes there was a couple hundred people, five ounce commemorative glasses in hand, eagerly awaiting a taste of the rarified brew. Things looked to be moving quickly enough, and with just a little more patience I could have sampled the Sonoma brewery’s standout offering, but I had my sights set elsewhere and elected to forego the ancient Roman’s namesake beverage.

After receiving my own glass, and deciding to skip the Pliny, I made my way towards the back of the hangar-like space, wanting to get the lay of the land, but not before grabbing a sample of Moonlight Brewing’s Legal Tender Ale, one of my personal must-trys. This, I think, was a mistake; I was a bit overwhelmed by the size of the building and struggling to take it in. I’d hoped to speak with someone from Mooonlight and ask a few questions about their un-hopped creation, but the moment got the better of me.

My hopes for a discussion about herbal ales vs. gruits dashed, I wolfed down my sample without giving it the consideration I’d intended. This turned out to be a prescient moment; as the night wore on there would be less room to move, and little solace from the din of the crowd. Reflecting on whatever I’d been served became increasingly difficult. This lead to me jotting down confident and nuanced tasting notes like, “Maybe the best smoked beer I’ve ever had?” or “Holy Crap!” Not to say that even under the best of circumstances I’d have penned Master Cicerone style profiles, but I realized early in the evening that given the magnitude of the event, sensory overload would be an issue. It wasn’t long before I abandoned note taking altogether.

I walked the length of the pier, stopping for a sip of Speakeasy’s Popgun Pilsner (oaked and unfiltered for the special occasion) and arrived at the SF Brewer’s Guild booth where they were pouring this year’s collaboration brew, New Frontier, a Kolsch style ale with satsuma and Douglas Fir tips. It was crisp and fruit forward but not cloying, and the evergreen flavors from the fir tips gave it a wonderful finish. It was an early stand out and easily one of the best beers I had all night. New Frontier will be on tap at select locations throughout Beer Week, and is being sold at local Whole Food stores in the bay area. I’m hoping to get my hands on some more before it’s gone forever.

Still shy of six o’clock, I continued surveying the area. Water stations were large and plentiful; food vendors lined an entire wall, and several food trucks were parked just outside on the patio. 4505 Meats was handing out free pork rinds. Best of all, portable toilets occupied a very large space in the back of the building. Fear of breaking the seal and being stuck in line to relieve oneself was not an issue, something I’m told had been a problem in years gone by.

I also spotted San Francisco mayor Ed Lee preparing to give his opening remarks to the swelling crowd. I don’t follow local politics, but from what I gather, his petite, toadstool-esque physique is a rather fitting reflection of his political undertakings. Rather than subject myself to what would likely be inane platitudes about community and such, I moved on to my next taste.

Armed with my list of beers to seek out, I began the processing of crossing off as many as I could. Hop Dogma’s Ol’ Keller, Moylan’s Haze Craze IPA, both went down easy, as I recall. Local Brewing’s Macaroon Pale Ale was good, but ultimately suffered from my own high expectations of a cookie-flavored coconut bomb.

Another standout came early on from New Bohemia Brewing Company out of Santa Cruz in their Light my Fire Smoked Helles. Smoked beers aren’t favored by all, and quite often those who make them tend towards a lighter smoke flavor. Not this one; intense smoke coated everything the way hours sitting next to a camp fire does, yet somehow finished clean. This isn’t a beer for everyone, but fortune favors the bold as they say, and if you like smoked beer, this is a bold one indeed.

One of the beers I’d most anticipated was Laughing Monk’s Peach Pulpit. Unfortunately a line in their jockey box was fouled and they weren’t pouring it when I got to their station. I settled for Coffee and Cream, which turned out to be delicious, and stepped outside for some air. The patio had filled, as had the previously empty picnic tables. Throngs of people were enjoying tacos, burgers, and BBQ. What I couldn’t imagine anyone was enjoying was the line for Pliny the Younger, which now snaked its way outside and more than half way down the length of the pier.

It was after 7 by then, and though there was still plenty of time left in the evening, I did not understand why people were willing to give up so much time for a taster size sample of one beer. There is simply no way to be satisfied with the return on that investment. I’ve had Pliny the Younger and it is very good. But it is not life changing. The skies will not part at first sip, nor will boozy angels sing. Several world class breweries were in attendance, as were dozens and dozens of up-and-comers, pouring a universe of IPA variations: Single, double, and triple. They had dry hops, wet hops, hole cone and cryo-hops. Cascade, Columbus, Simcoe, Citra. Old World, New World, experimental, and noble. Hallertau, Hollerback, added in the boil, added in the keg, pushed through a Randall, and down our greedy throats (I might have made one of those up). What I am trying to say is that if delicious hop bitterness and aroma were what a person sought, it was there for the taking, and without a line.

Sours also played a prominent role that evening, giving the almighty IPA a run for its money as the most represented style. Berkeley’s The Rare Barrel had a consistent but manageable line that depleted their resources quickly, leaving kegs empty and their station unmanned before the clock struck 8. Firestone Walker served two special sours that also garnered a short wait, as did San Francisco’s Thirsty bear, all of which were tart and tasty.

For my money, San Leandro’s Cleophus Quealy ruled both the sours and the night, serving up a beast of a beer in their gin barrel aged Aviato, with cherries, lemons, and violet. It had a complexity unlike anything I’ve ever tasted, but without overwhelming my brutish, untrained palate. I went back for it three times and was no less impressed after every pour. Just dazzling stuff. A trip to their tap room is in short order, and if the work they put on display Friday is indication of the product they are turning out, Cleophus Quealy could be giving The Rare Barrel a run for their money in the East Bay sour game very soon.

All told, the Opening Gala was a tremendous success. Though the crowd was thick, it remained manageable, the atmosphere convivial. I chatted with people, got recommendations about what to try and gave my own in kind. Though walking around with my notepad in hand did garner some curious looks, it gave me direction and prevented aimless wandering; the two days spent studying the list of beers on tap proved well worth my time. I left the event happily buzzed, feeling oddly accomplished, and looking forward to what the rest of SF Beer Week might have to offer.